I had never heard of a rally until I stumbled across the Iron Butt Rally site (http://www.ironbuttrally.com/IBR/default.cfm) in 2009 and found it fascinating.  I thought this was a sport I might like and registered for the 2010 Cape Fear 1k (http://www.capefear1000.com/). That year I came in 32nd out of 34 finishers in my starting location due to several rookie mistakes. I rode it again in 2011 where I came in 30th out of 37 mainly due to a bad starting receipt which cost most of my points. I have participated in a few other rallies and managed to pull off 1st place in the 2011 Void rally (http://www.rallythevoid.org/) in my starting group. Taking everything I have learned the past 2 years I was determined to make a decent showing this year.


The Cape Fear sports 3 starting locations for 24 hour riders and a mini 10 hour rally. I was in the 24 hour (really 29 hours) group starting from Jamestown, NY which interestingly enough is the hometown of Lucille Ball. The rally started at 10am on Friday and ended at 3pm on Saturday in Wilmington NC.
Friday morning I made a trip to Wal-Mart to pickup a few supplies and find a location with a good starting receipt. All receipts must list the city, state and an accurate time and date. Starting in Jamestown meant the receipt had to list Jamestown, NY. Fortunately there was a fuel station that had an acceptable receipt right next to I-86 to make escape easy.


Starting times have to be within a 20 minute window of 9:50 to 10:10am. It is also required to send a text that contains rider #, ODO and start time to the rally staff. With all this done I was on the road at 9:59am.
My chosen route took me west and then south into Pennsylvania, Ohio, West Virginia, Virginia, Tennessee and North Carolina. Here is an image showing all the possible bonus locations and the route I selected. Red indicates high points, green medium and blue low points. 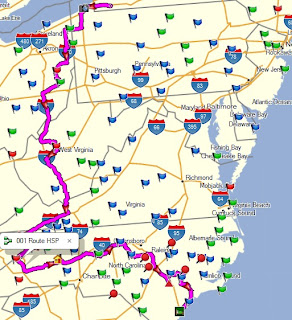 My first bonus was to take a picture of the Andover Bank Time Capsule marker in Andover Ohio.This was a pretty straightforward bonus and there were a number of other riders grabbing the same one when I was there. 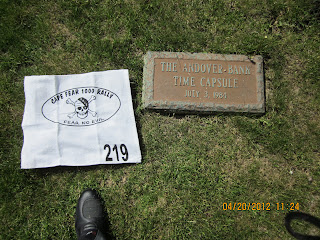 Next on the list was a Highway Historical Marker in Carrolton OH on the subject of the fighting McCooks. This bonus specifically called for the side that lists the members of the “Tribe of John” which required leaning back into some bushes to get the correct picture. 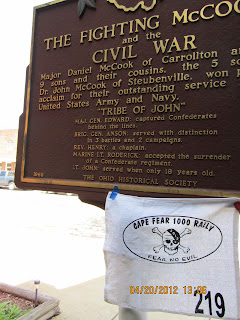 Third on my route was the birthplace of Clark Gable in Cadiz, OH. This was another easy one to grab and document. 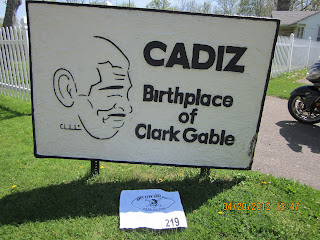 The next bonus was a fairly long run down into West Virginia to get a picture of the Looneyville post office. As the rally book mentioned this one was named appropriately for anyone crazy enough to participate in these events. 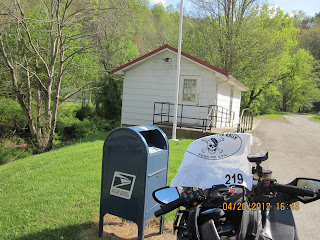 Next up was another long slog to the NC/TN state line to get a picture of a sign on the Appalachian trail. By this time it was well past nightfall and pretty dark along the twisty back roads that get you there. The bonus requirements stated to park in the dirt pullout and locate the trail head to the NE. That probably would have been pretty easy during the day but it was DARK and I mean DARK. Using my insufficient flashlight I located what seemed to be the trail and started heading up the hill. Motorcycle gear does not make good hiking gear and I had went far enough I was just about to turn around thinking I was in the wrong place when I finally came across the sign I needed. 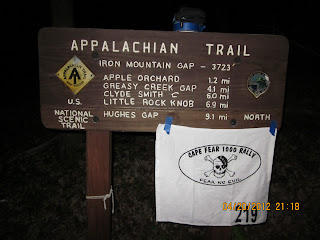 Next up was the Paint Rock HHM near Hot Springs, NC. Another rider (Bob Lilley) and I had been playing tag at a number of bonuses and once again met at this bonus location. In general there is not a lot of rider interaction during the rally but in this case it helped both of us to hold each other’s flag at this location. This would be the last place I saw Bob until scoring back in Wilmington. 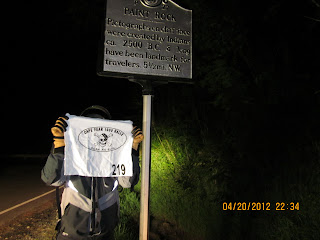 This years rally provided an unusually attractive rest bonus with 5000 points for 4 hours and up to a maximum of 11,000 for six. It also happens that I was able create a route that took me within 11 miles of my house so it only made sense that I use it for my rest and save the cost of a hotel room. I was able to start my rest time around 12:10 and was back on the road 6 hours and 1 minute later successfully claiming the full value of the bonus along with getting more sleep than usual while in rally mode.
Next up a photo of Speedy's BBQ in Lexington, NC. I hear the food here is good but trying it out would have to wait. 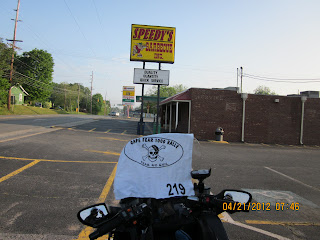 The next bonus required that a photo of the rebuilt train depot in Gibsonville, NC so that the scorer could read “Gibsonville Depot” on it. I found that name on two sides of the building and took pictures of both to make sure I had the right one. Here is the better picture. 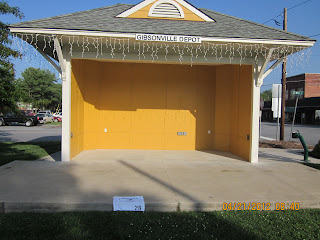 Next up was to take a picture of a geological survey maker at an abandoned gas station in Gum Springs, NC. I had never seen one of these before and thought it was pretty cool. 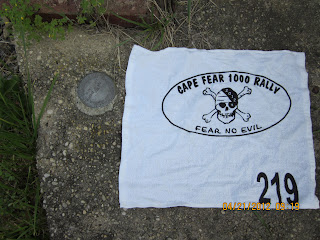 Following this it was time to get to the time restricted odometer check which was only open from 9am to noon. Along with the ODO check you could elect to participate in the time-speed-distance challenge which was worth a fair number of points. On this one you lost points for being too fast of too slow. It turns out I was 23 seconds too fast but that was close enough to keep most of the points.
After finishing the ODO check it was time to get back to bonus locations so next up was the Mt. Olive pickle factory in Mt. Olive, NC. 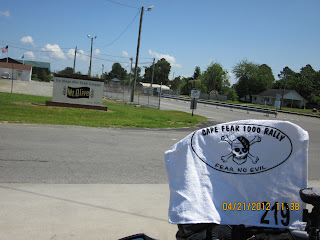 There were a large number of high point bonuses that were only available after 12pm but the problem is the rally ends at 3pm and with my route it was only possible to grab one in Kinston, NC. The CSS Neuse was a confederate ironclad that never saw battle. It ran aground it first time out and was scuttled soon after to avoid capture but the union forces. 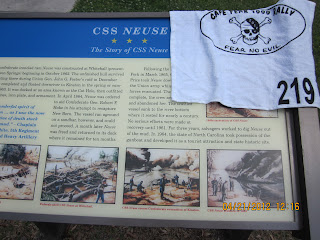 It was time to start heading toward Wilmington and just grab anything not too far out of the way. This left a replica of the Bodie Island lighthouse in Pink Hill, NC. I got this bonus during last years Cape Fear so I knew exactly where it was. 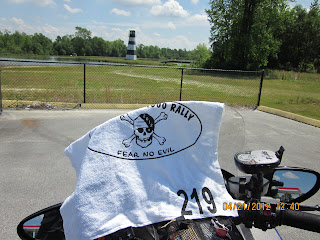 The next bonus was to take a picture of yourself with Scully the pirate at the Quartermaster restaurant in Surf City. With no one else around this was a more difficult task than I thought it would be and the picture that resulted is too embarrassing to include here but not too embarrassing to turn in for points.
The final tasks were to pick up cold adult beverages, make it to the checkpoint and stop the clock before 3pm. Beverages purchased and the clock stopped with 20 minutes to spare.

Now it was time to do the paperwork. My method is to print 2 rally books keeping one fully intact and clean while I cut out the bonuses I plan to claim from the other. I then take each bonus listing and affix them to an index card and keep that stack of cards in the window of my tank bag. This allows me to see the requirements of the upcoming bonus without opening anything and provides a place to record the data that needs to be captured. Once finished I then copy the data from the individual cards into the rally book to be turned in.

With the rally book complete and turned in for scoring all there was to do was wait to be called and scored. Fortunately scoring was uneventful and every claimed point was awarded. I ended with a total of 50,265 points which was enough for 4th place in my starting group and this. 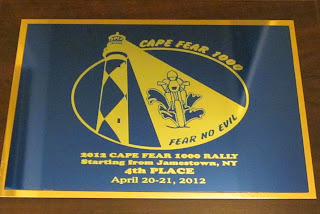 The awards banquets at these events are always entertaining and this one was no exception. We also had a BBQ dinner was excellent.

I awoke about 4:30 Sunday morning to the sound of rain. The weather during the rally had been perfect with nice temperatures and not a drop of rain. Apparently the ride home was going to be a different story. I packed up and departed by 5am riding through rain for all but the last 30 miles. Other riders heading north had to contend with far worse.

I would like to publicly thank Jim Bain and the Coastal Carolina Rally Krewe who make this event possible. I can't fully imagine the time and effort involved in making this happen so successfully year after year. I can't wait for next year.